The one place to find the hottest news from the page.
Good things to know!
The heart of the page! Be sure to say hello!
What is done, or still needs to be done?
Here you can find lots of information about world of XWA-Modding.
This is were we show off our models
And here the fun starts!

In this ongoing project I am attempting to remaster the imperial quarters to give the Empire install a different feel from the rebel one. Some of the existing empire install assets will be reused and modified to nod to the previous authors. Certain other points are anchored to avoid having to change their clickable locations. I have noticed that the majority of clutter that dominates the rebel quarters seems disabled at the end of the campaign on the empire install. I may go back and rework those objects so that their positioning in the room makes more sense. Work here has been done in little chunks, below you can see the progress.

Notes:
1. I was unable to determine how to make the game see an image larger than 640 x 480 so I reduced the size.
2. Until I adjust all the family room dats for the empire install some objects, namely the hanger for the uniform will appear weird.

Final Result... for now, with medals and officer picture moved. More doodad moves to come later. More likely to redo all of them so they are more empire centric. 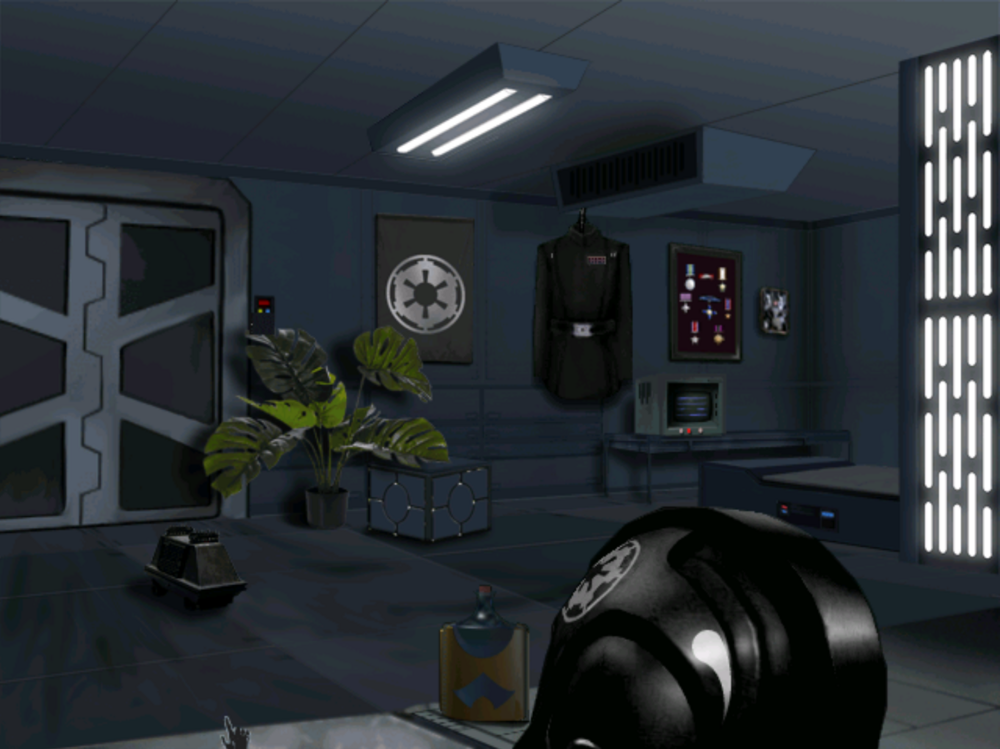 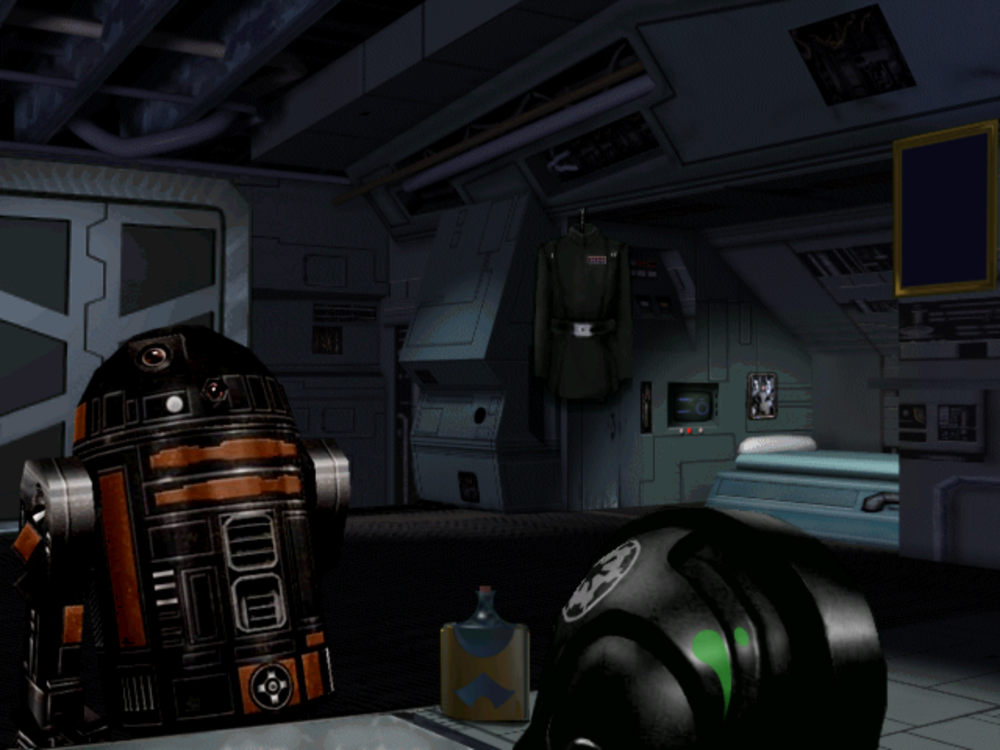 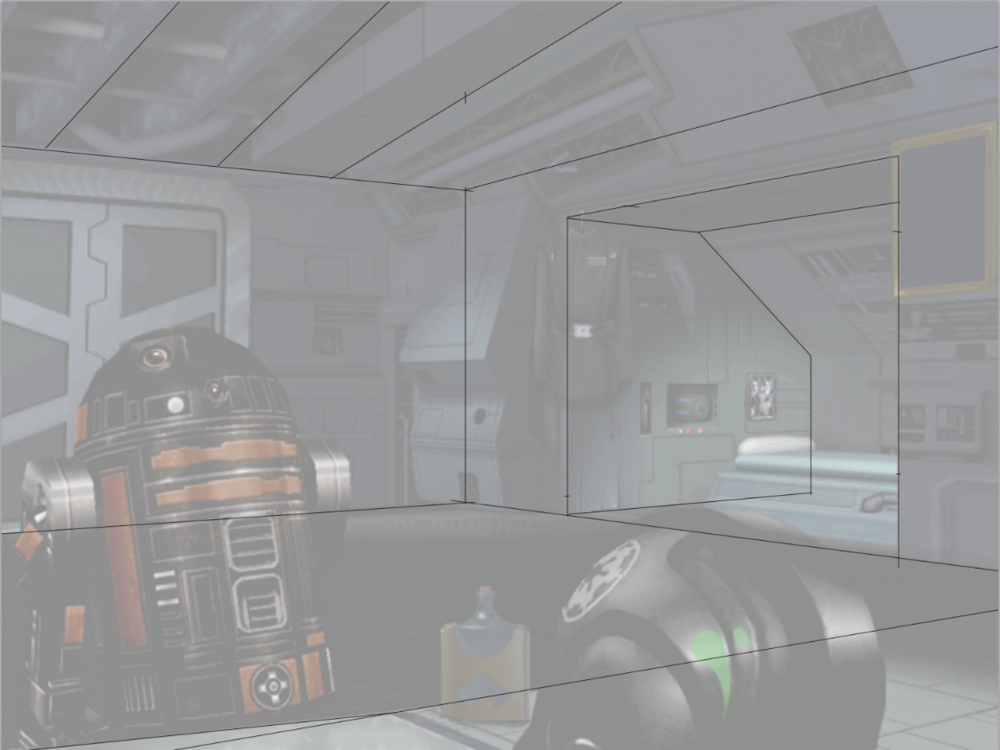 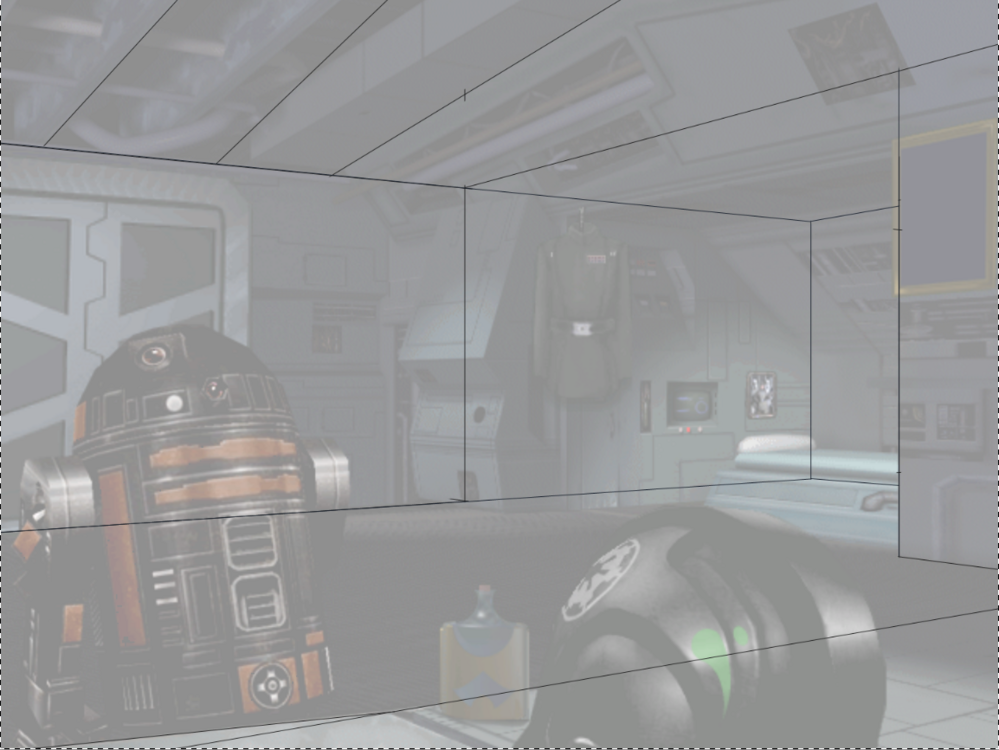 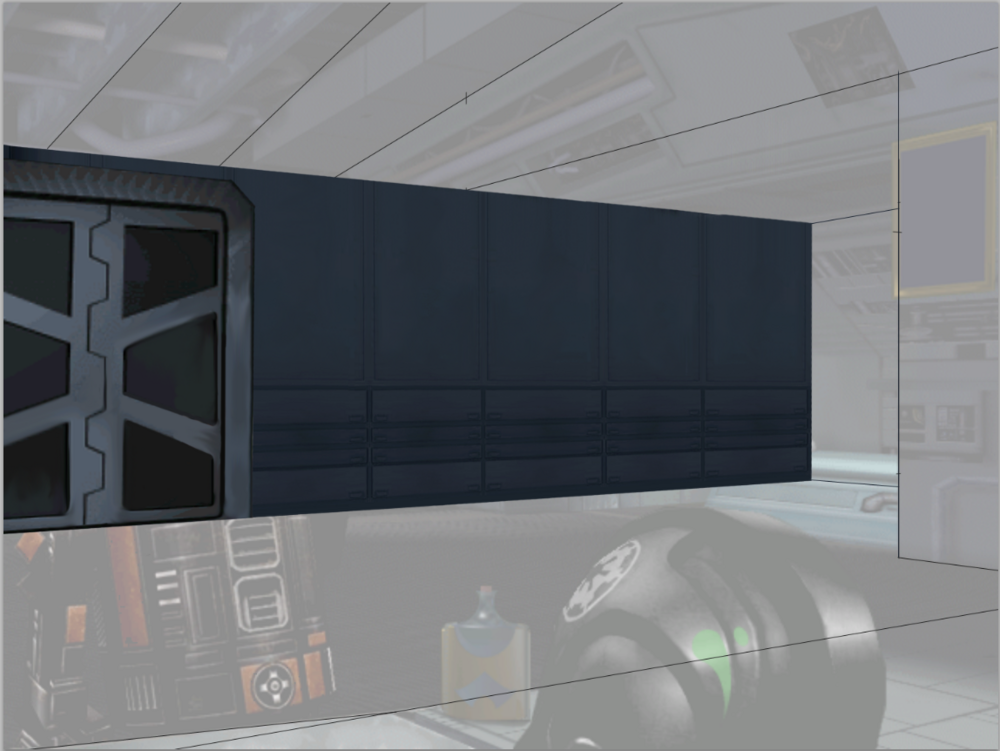 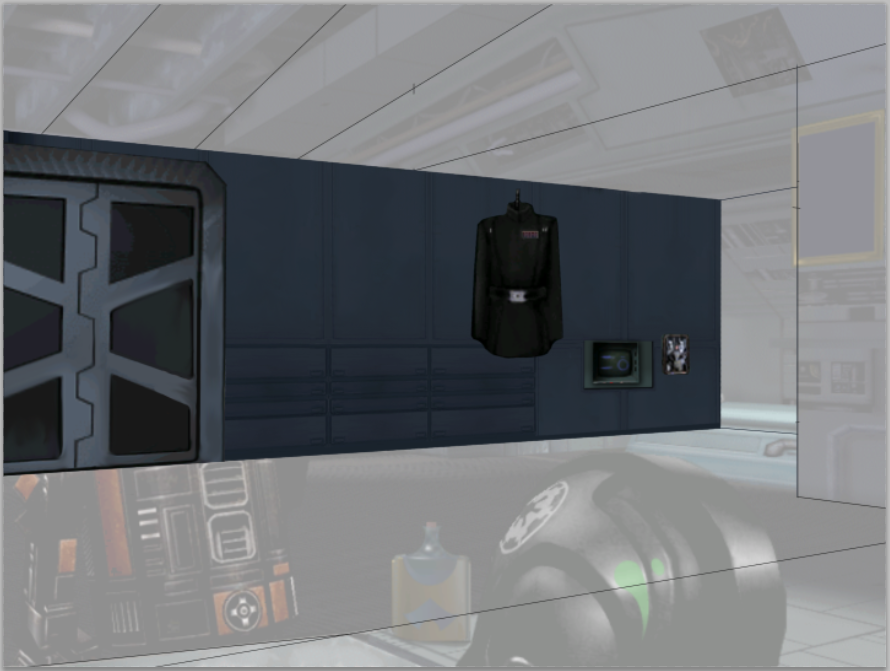 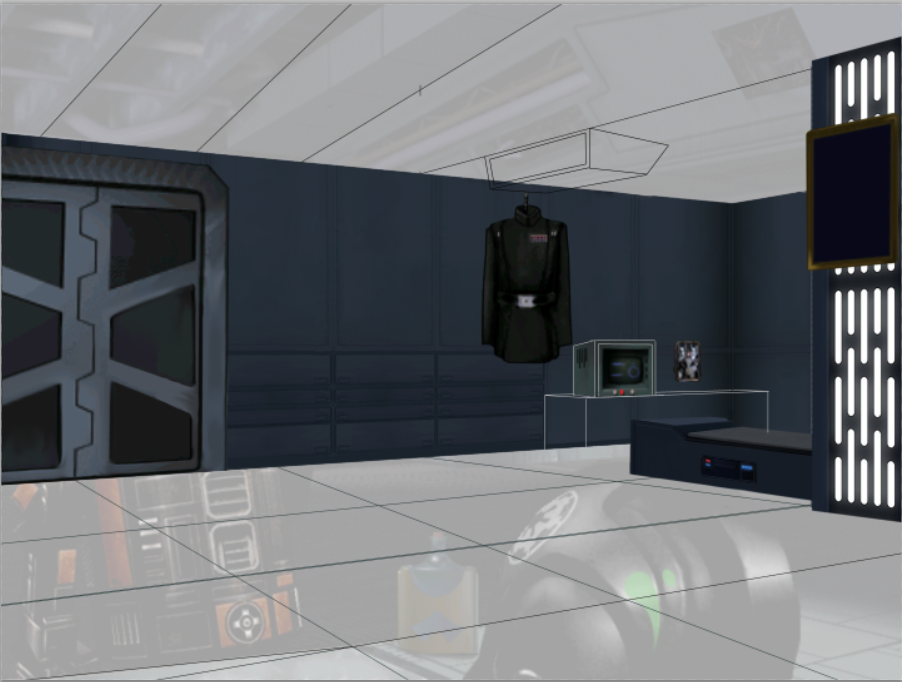 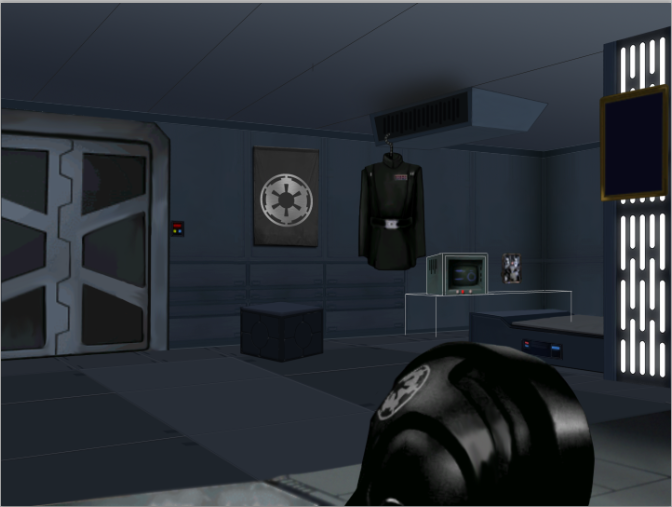 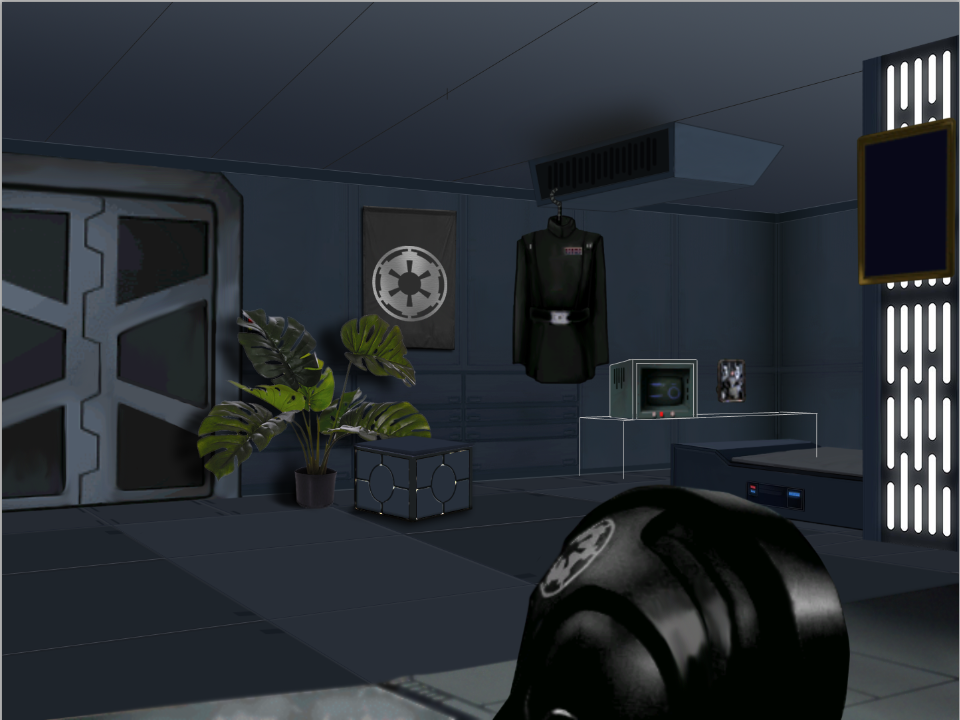 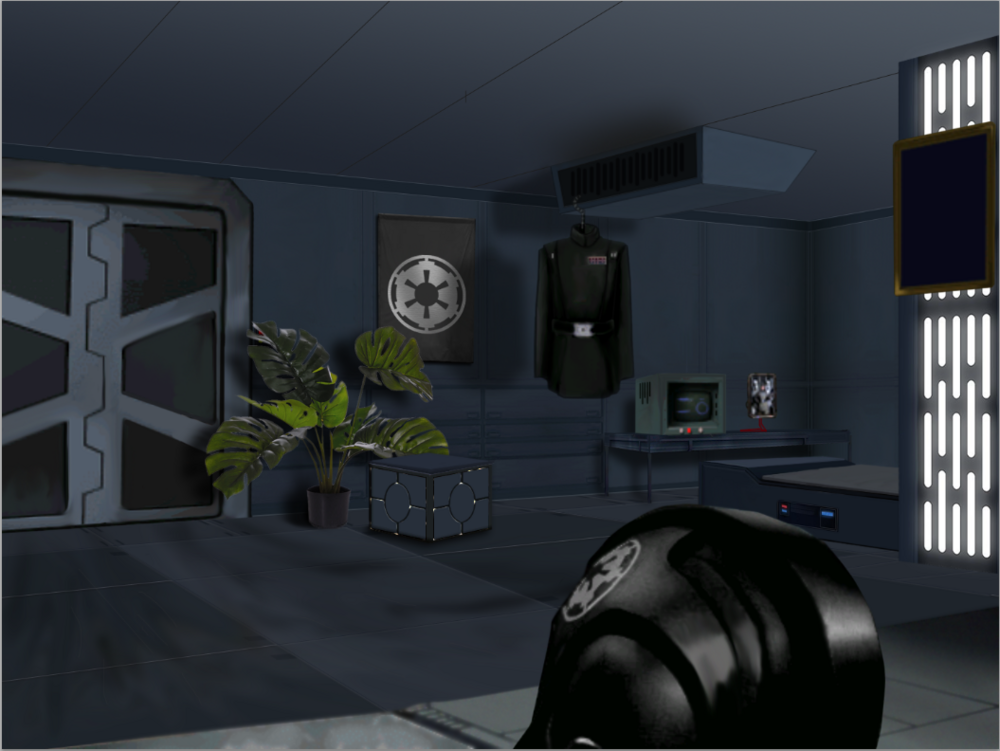 Inspired by Agent Kallus' room on the Star Destroyer in Rebels 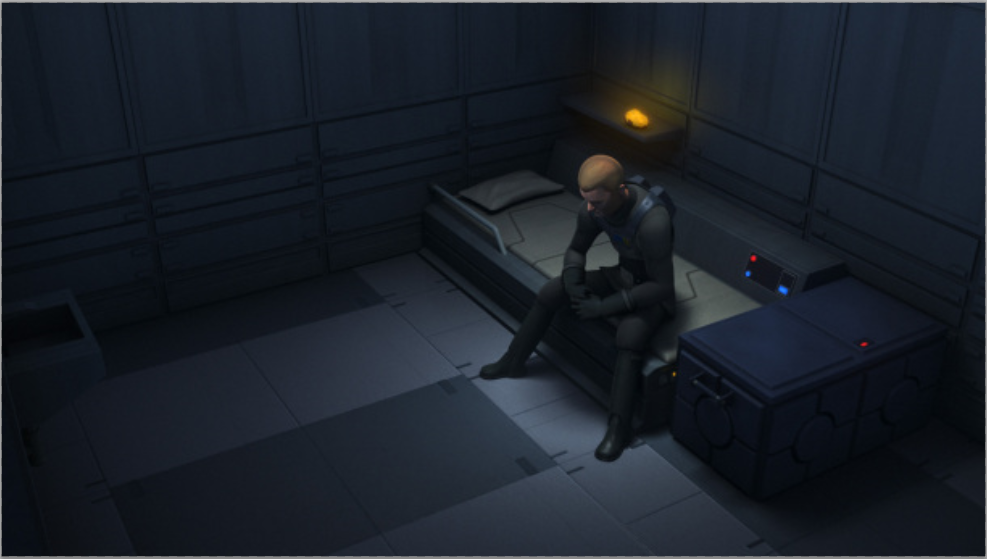 Light panel wall should be moved, the display case looks bad, plus it wouldn't realistically be mounted there either way. Otherwise this is looking pretty good.

Ideally, if I figure it out, the medals will go above the desk. This is just a prelim

Ok, I got your medals moved.

Never give up on a friend, never surrender to an enemy.

The perspective of the crate is outta whack, I think the corner closest to the camera needs to be adjusted up a bit.

Right on. Its bugging me too. The plant and box are probably going to be moved and adjusted and added later as part of progression if I can get a hook going.

Oh man, this is glorious!

A little update, I haven't quite sliced up all the doodads yet for the game to read them individually, right now I'm just building the scene. 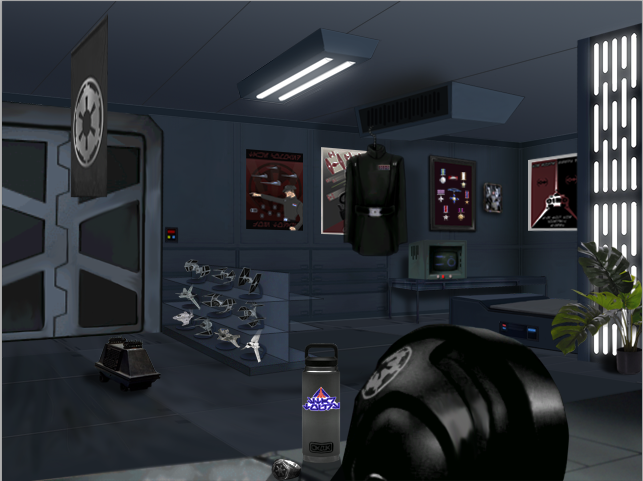 The bottle is a bit out of place imo, but otherwise I damn well love it.

I really like the idea of the collection of miniature starfighters in a pilot's room.

The bottle is just a clutter item. Subject to change. "A headhunter from Star Tours keeps sending you promotional items as an attempt to get you to transition to civilian work. This Wampa-brand thermos has the star tours logo on it."

In an attempt to prepare for having a hook that better controls the visibility of the clutter items in the family room, I am attempting to record and verify their stock/vanilla triggers. Control of the items seems hard coded and their arrival does not seem to be a function of mission number in familyawards.txt in Frontres\Medals.

Information was verified against the XWA Expansion Guide https://darksaber.xwaupgrade.com/XWA_Expansion_Guide/ and then expanded upon. In the below table you can see that most of the clutter items are triggered only by completing specific missions. Setting the current mission with a pilot editor has no effect on these items. Several other items, the Helmet, uniform, lady blue picture and cologne are controlled by simply reaching a mission and can be triggered by setting a pilot to a specific mission with a mission editor.

ADITIONAL NOTE: Using a pilot editor to change the pilot file may erase "successfully complete mission" clutter items you have already earned. Use at own risk. 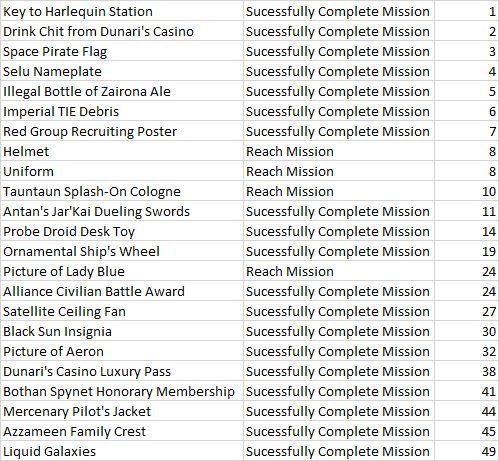 
JeremyaFr wrote: ↑
Tue May 15, 2018 6:09 pm
Hello,
I don't know if this has been published somewhere.
Here is where the points are stored if you want to modify them.

The points for the Kalidor Crescent are stored at offset 1B1CA8 as an array of 6 int:

The points for the Ranks are stored at offset 1B1CC0 as an array of 8 int (0 corresponds to Recruit):

Mark_Farlander wrote: ↑
Fri Feb 15, 2019 9:00 am
Hello pilots,
I didn't wish to make a request but I've always wondered if is it possible to gain access to all flight ranks playing the campaign.
I mean there is a restriction to rank access: if you only play the campaign missions you cannot gain a rank higher than Marksman 1st class.
No matter your score or how many things you destroyed.

I was just curious to know if any patches/mods have been done to access all ranks playing the campaign missions.
A player usually reaches the rank of Marksman 1st class in the second training mission or in Battle 1 at most.
That's why I opened this topic.

the ranks above Marksman 1st class are obtainable only in multiplayer battle, against human adversaries. If you use the trainer to obtain them, you will be degraded slowly if you do not fight again human pilots.
When there was an active xwa tournament community, Mk 1st Class was the entry level for main event, and there were tiers, to balance the fight.

Obviously we need to start compiling this information in the wiki.

Hopefully we could bring the player's experience outside of combat to something a little less linear and more comprehensive to allow for many different campaign and faction configurations. The player's menu experience reflects his type of pilot, and his progression is ongoing and can be affected by new missions, both campaign style and standalone. Each player can focus on a different type of play style and the player still has a rewarding frontend experience.

1. New concourse room created. Copy most functions of simulator room. Change artwork to represent a livefire type setup over simulator. Uses Justagai's MP hook and combat mission folder.
2. Mission records and score are dumped to a new "tab" in the pilot statistics computer. There will be a SP campaign tab, family tab, simulator tab, and then a new skirmish hangar tab.
3. Player rank is now affected by both SP campaign score and the Skirmish hangar score, which I will refer to as SPS and SHS
4. Kalidore medals affected by bonus score in the SP campaign is also now affected by the skirmish hangar score.
5. Standard campaign medals previously received by hard set mission numbers in the medals.txt are now tied to a config with the following options for each of the 7 medals

6. Family room decorations seem to be hard set in the exe with either mission completion or being at a specific mission to receive.
The functionality will need to be tied to a config file for the 23 main objects with the following options

B. Less than ideal: TBD

JeremyaFr wrote: ↑
Tue May 15, 2018 6:09 pm
Hello,
I don't know if this has been published somewhere.
Here is where the points are stored if you want to modify them.

The points for the Kalidor Crescent are stored at offset 1B1CA8 as an array of 6 int:

Never noticed this before but these little mission completion stickers seem to be for successful mission completion when flying rebel campaign missions. There seems to be no documentation on it, but I do know where the images reside, (just never knew what they were before). 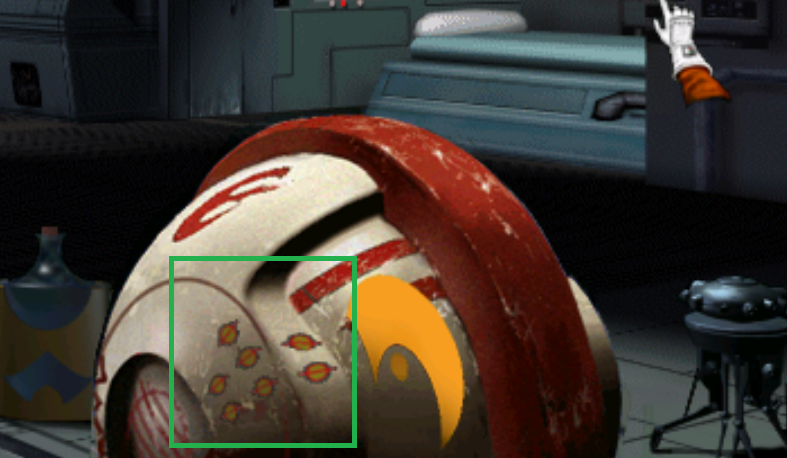 Something like this would be added to my wishlist as well. Not tied to specific completion of missions but rather, cumulative after completion of ANY mission.

Yea when making the original Imperial Quarters, I blanked those out in the Imp version of the Frontend_UCP.dat, sorry

No apologies necessary. Although the 501st doesn't like helmet decals, to hell with them, I think it makes sense. They aren't droids. I'm sure at some point I can come up with something.

Another reason I blanking them out, but I kept the horn decal, as back then I didn't know what else to do lol

I tried installing this (on a DSUCP with Imperial ISD concourse)... and this makes my game crash at startup.

I'm wondering if that's linked to the bug that was fixed in the DSUCPImpConcourseFix file (from Darksaber) - which updated Frontend_UCP.dat. My game would also crash without this patch.
In your remaster, Frontend_UCP.dat is the file that makes the game crash - when replacing it with Darksaber's fixed version it works fine (but it's the old quarters).

Would be great if you could check (that is: merge Darksaber's fix into your version), it looks MUCH better than the current quarters (although maybe quite large for a pilot's room... fine once you'll be a general but really huge for a young cadet).

Yes, you are correct, I was having this issue as well, and I cant remember what Darksaber ruled the issue to. I packed this right in the middle of that debacle. He might be able to jump in and jog my memory and I can get this sorted.